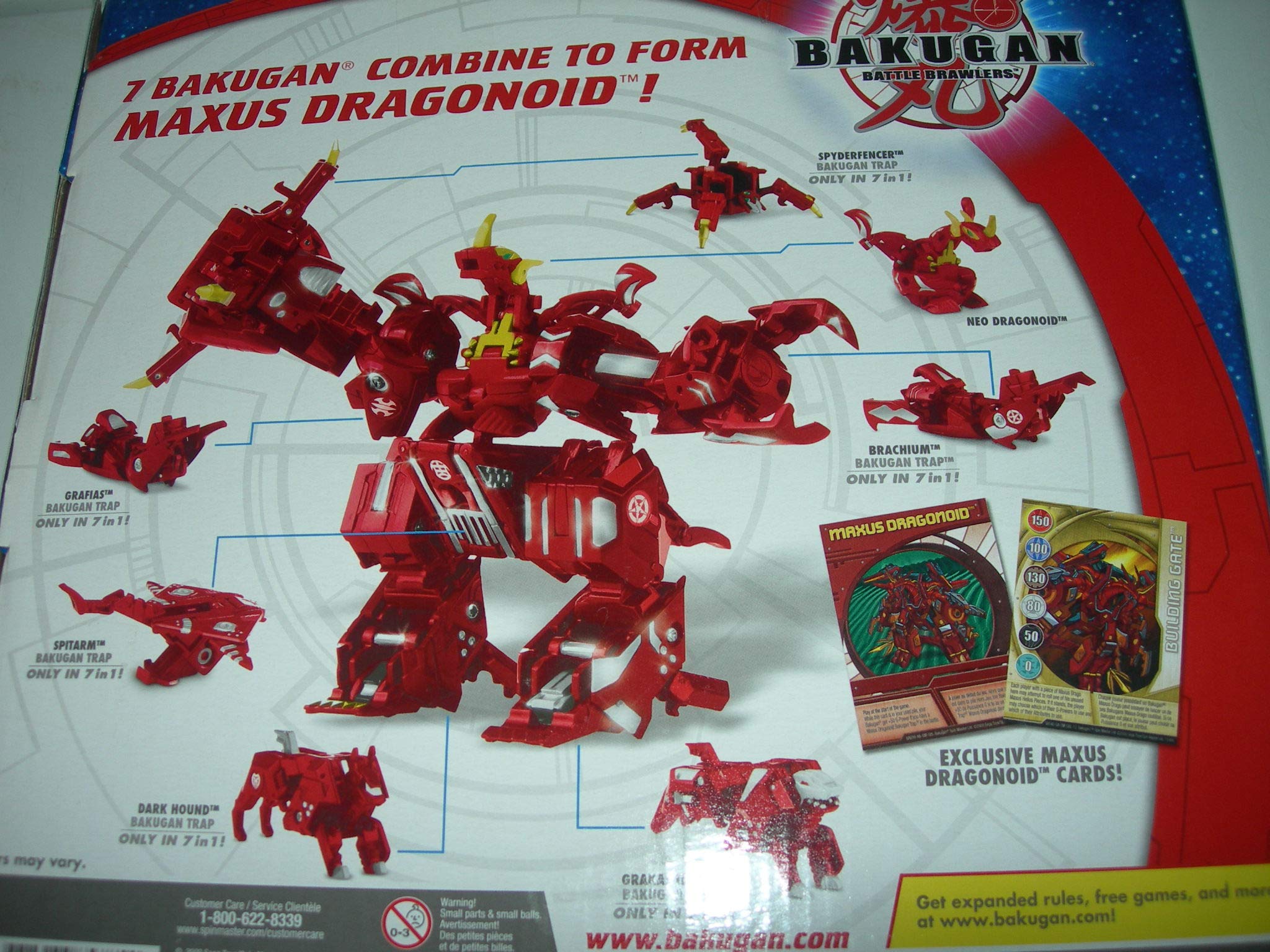 .com ---- One of the biggest and most powerful Bakugan yet, the Maxus Dragonoid will have your Bakugan opponents quaking in fear. It includes one Bakugan warrior and six traps that, when transformed, can be assembled into a giant dragon robot. These seven pieces are unique and can't be found anywhere else, making this set essential for any Bakugan player/collector. 7 in 1 Maxus Drago Ages: 4+ What We Think Fun factor: Durability: Ease of assembly: Novelty factor: The Good: Innovative, pocket-sized toys that are enjoyable to play with. The Challenging: Additional Bakugan pieces are necessary to play the game properly. In a Nutshell: With seven unique pieces, an essential part of any Bakugan player's collection. Get in on the latest craze with Bakugan. ( https://images-na.ssl-images-.com/images/G/01/toys/detail-page/B0024FQD8C-1-lg.jpg ) Unleash the fearsome power of the Maxus Dragonoid on your Bakugan foes! View larger ( https://images-na.ssl-images-.com/images/G/01/toys/detail-page/B0024FQD8C-1-lg.jpg ). Get In On the Bakugan Craze For those who are unfamiliar, Bakugan is an inventive strategy game based on the popular anime TV series, "Bakugan: Battle Brawlers." It pits a variety of "Bakugan warriors" against each other for points. The Bakugan themselves are magnetic, spring-loaded marbles that -- when exposed to a metal "gate card" -- burst open to reveal a fearsome warrior. The mission of the Bakugan strategy game is to capture the opponent's metal gate cards. This is achieved by rolling your Bakugan warriors onto these cards and doing battle with defending enemy Bakugan. The game involves a surprising amount of strategy, and features various tactical cards and trap pieces that help protect your Bakugan warriors. Room for the Imagination This game combines skill (aiming your Bakugan) with strategy (placement of the cards). Players also enjoy the way the warriors pop open on the magnetic cards -- although sometimes they do it even when they don't land on the cards. Players unfamiliar with the TV show, may feel a little lost at first in the world of Bakugan. But with the help of the colorful, animated Bakugan Web site, they will get what the game is about and how to play. Even without the official strategy game, Bakugan toys are enjoyable and can be played with like regular action figures. Fans of the show will like role-playing as one of the various characters, such as the fiery 12-year-old leader "Dan" or the wise "Marucho." Maxus Dragonoid Expands Your Bakugan Collection This particular set contains one Bakugan warrior (named Neo Dragonoid) and six Bakugan traps (Grakas Hound, Dark Hound, Grafias, Brachium, Spitarm and SpyderFencer.) These pieces can be combined together to form the massive Maxus Dragonoid monster. The transformation process is a bit complicated, but the set includes clear instructions that make assembly easy. The assembled Dragonoid is a unique toy, although a bit unwieldy -- if not positioned correctly, he will easily fall down. Each of the seven Bakugan that compose Dragonoid can be used individually in the strategy game. Avid players will be happy to know that this set also includes a special ability card, which will come in handy when you're devising a strategy to topple your enemy. Just keep in mind that, in order to play Bakugan properly, you'll need several other Bakugan marbles/cards that are not included in this package. Kids who are new to Bakugan might be better off with one of the various starter packs. What's in the Box One Bakugan warrior, 6 Bakugan traps, ability card and metal gate card. Maxus Dragonoid disassembles into smaller Bakugan that can be used in the official strategy game. From the Manufacturer --------------------- Ultimate Dragonoid appears in the animated hit cartoon show- Bakugan Battle Brawlers New Vestroia – . He is one massive battle monster that fights for the powers of good, to free his fellow Bakugan from the evil Vexos and to save New Vestroia
Show More
Reviews