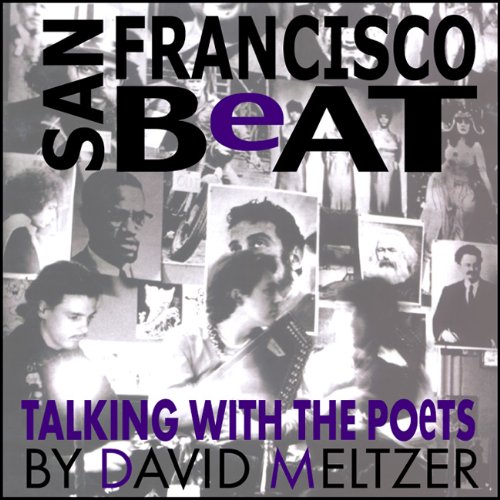 Brand : Brand City Lights Publishers
from USA
to Iceland
in 5-8 days
At your doorstep by Jun 29  to Jul 02 with standard delivery

San Francisco Beat is an essential archive of the Beat Generation, a rich moment in a fortunate place. America—somnolent, conformist, and paranoid in the 1950s—was changed forever by a handful of people who refused an existence of drudgery and enterprise, opting instead for a life of personal, spiritual, and artistic adventure. In these intimate, free-wheeling conversations, a baker's dozen of the poets of San Francisco talk about the scene then and now, the traditions of poetry, and about anarchism, globalism, Zen, the Bomb, the Kabbalah, and the Internet. Thirty years ago, poet David Meltzer interviewed his poet friends for The San Francisco Poets. Now in San Francisco Beat he has combined these classic interviews with recent follow-up. San Francisco Beat features major new interviews with Philip Lamantia, Joanne Kyger, Gary Snyder, Jack Hirschman, Diane di Prima, Jack Micheline, Philip Whalen, and David Meltzer himself. David Meltzer is the author of many books of poetry, including Tens, The Name, Arrows: Selected Poetry 1957—1992, and No Eyes: Lester Young. He is the editor of Birth, The Secret Garden, Reading Jazz, and Writing Jazz, among other collections. His agit-smut fictions include The Agency Trilogy. Meltzer read poetry at the Jazz Cellar in the 1950s and in the 1960s fronted the band, Serpent Power. Meltzer teaches poetics at New College of California. Table of Contents/Interviewed Authors Preface Acknowledgments Diane di Prima (1999) William Everson (1971) Remembering Everson (1999) Lawrence Ferlinghetti I (1969) Lawrence Ferlinghetti II (1999) Jack Hirschman (1998) Joanne Kyger (1998) Philip Lamantia (1998) Michael McClure I (1971) Michael McClure II (1999) David Meltzer (1999) Jack Micheline (1994) Kenneth Rexroth (1971) Remembering Rexroth (1971) Gary Snyder (1999) Lew Welch (1971) Philip Whalen (1999) Bibliographies Preface Nothing is hidden; As of old All is clear as daylight -Anonymous haiku, 16th century San Francisco Beat: Talking with the Po
Show More
Reviews